Ayesha, you are the girl that I never had…

Warriors fan or not, you know who Stephen Curry is. And if you’re an actual fan, then you are also familiar with his spunky daughter Riley and God fearing wife Ayesha. While Riley emerged a star last season due to her sassy post-interview cameos, more recently Ayesha has been taking social media by a storm for being … herself.

To give you some background on the couple, the two met in church, were college sweethearts, got married when Steph was 23, and now have two beautiful girls together. Ayesha was never a stripper, does not have any children out of wedlock, and does not have any half naked pictures of her on Instagram promoting detox tea. In a world and profession where morals, fidelity, and marriage are often questioned, they seem to set the standard of what a family should be and Ayesha Curry is the prototype wife.

This should be a good thing, but it’s actually had the reverse effect for some. While Ayesha is a woman many of us can look up to, her existence has caused others to look down on anyone who doesn’t follow the Ayesha blueprint. 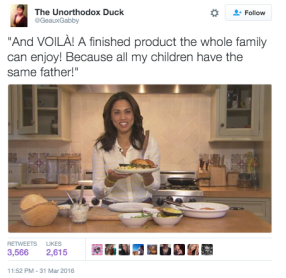 I’ve been a fan of Ayesha Curry even before I was a fan of Stephen Curry. When he first started (and I had a Monta Ellis chip on my shoulder) I remember seeing a picture of him and his family at Bucca Di Peppo in the city. Naturally, I saw her pretty face and stalked her on social media. I ended up finding her Instagram and Little Lights of Mine website, and have been a follower ever since. I think she’s amazing and possesses qualities I think any women, including myself could benefit from having. However, I don’t think you are any less of a women if you DON’T have these qualities.

Interestingly enough, I’ve seen more men than women contributing their two cents to the matter in true misogynistic form. The truth is, good women like and not like Ayesha Curry have BEEN existing. Ya’ll remember FLOTUS right? And I’m sure anyone reading this post right now knows an amazing women too. On a surface level I totally get it, but to compare Ayesha to anyone else is obsolete because there is no other Ayesha Curry.

If you know you’re a good women, you wouldn’t be offended by Ayesha Curry and what she represents. And if you are a man, I don’t want to hear shit about you looking for an “Ayesha Curry type” when you’re getting kicked off the D-League.

**Editors Note** I really hate that I can no longer just write, and have to explain everything but just so you know. I am in no way discrediting those in the D-League. The point in using that as an example is to not ask for what you can’t give.