Under The Boardwalk, Down By The Sea …

When I got notice that they would be showing cult classic, The Lost Boys on Santa Cruz Beach earlier this week, I nearly shit a a brick. For those of you who didn’t have a childhood, The Lost Boys is only the BEST vampire movie with the best theme song (just the chorus though) to ever exist. Luckily, I share this movie obsession with my cousin who along with his brother, used to reenact the movie with me when we were little. So it only made sense that we drove down to Santa Cruz to make a day of it. Click after the jump to see some beautiful pictures of the boardwalk. 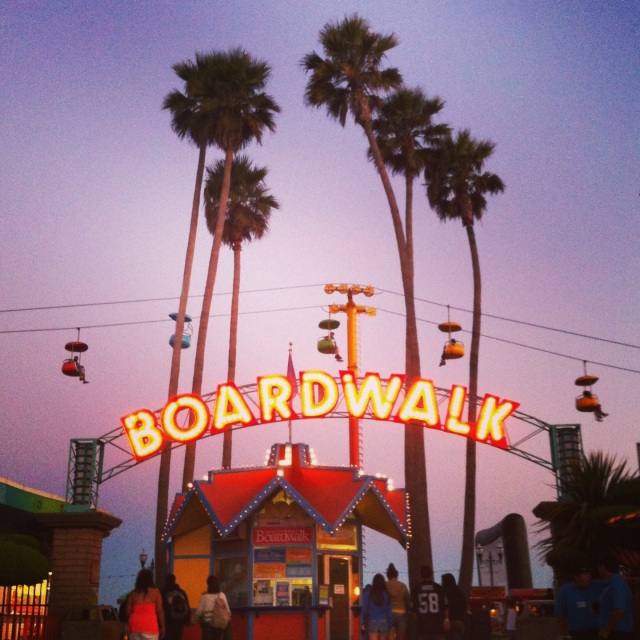 A trip to the boardwalk isn’t complete without riding the Sky Glider. It’s the best way to get from one side of the park to the other while enjoying the view.

The Giant Dipper, which is one of the ten oldest roller coasters still in operation in the US, is the signature ride on the boardwalk. It doesn’t have any loops, and might not be as scary as some of the newer rides, but it’s definitely fun. We rode it three times just to ensure ourselves a front seat.

My cousin is a linebacker, he didn’t trust that the little chains on the Sea Swing would support him and I don’t blame him. I just watched everyone else swing, and prayed nothing snapped. 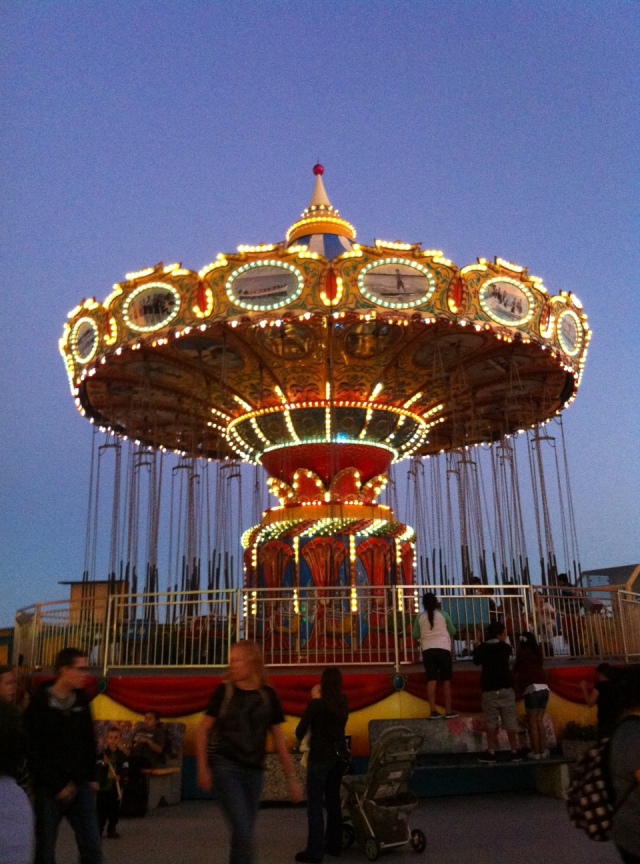 For those of you thinking of visiting the boardwalk, I highly suggest checking their website for discounts first. After 5pm on Wed. and Thurs. parking is only $12 and on designated days an unlimited ride wristband is only $12 with a Pepsi product. Way better than paying $33!

The movie promptly started at 9pm just as the sun was disappearing, leaving a beautiful backdrop behind the screen. Although the beach was packed, there were no bad seats and you could hear the audio clearly as long as you weren’t directly in front of any rides. It was great!

During the intermission, we decided to ride the ferris wheel. Because, duh. We thought it would be a nice, chill way to see the boardwalk at night and end the day with. Except, THAT SHIT WAS THE SCARIEST RIDE I’VE EVER BEEN ON IN LIFE. I don’t remember ferris wheels ever being this fast or rickety. My cousin could barely breathe without it tilting forwards or backwards. I wanted to be more scared, but couldn’t stop laughing at him. The best, worst part? It stopped right when we were at the very top of that bitch.

After the ferris wheel, we decided to take the Sky Glider back to the screen. Usually this ride is scary to me, because it sways when it stalls, but after the Ferris Wheel of Death, it was a walk in the park. I could hung upside down from it without skipping a beat.

By the time I got back home, I was exhausted from all the walking and screaming. But it was well worth it. I definitely suggest catching a movie or concert on the boardwalk while the weather is nice. Besides, it’s free! I’ll definitely be back soon.

1 Response to Under The Boardwalk, Down By The Sea …