I woke up to a series of thought provoking Tweets from one of my favorite bloggers the other day regarding female friendships. While I found it rather pretentious for him to say that men value friendships more than women do, as a mere observation I can definitely see where he’s coming from. Especially, when some of his observations ring true. I don’t think he intended for his initial tweet to come off as negative, and I’m not trying to change the minds of those who agree with him. I’m just contributing my personal explanation as to why things may seem the way they are. I suppose the best way to write about the topic would be to respond to the Tweets individually starting with this one:

My ex used to get annoyed that I referred to almost everyone as a “friend,” when really, as long as you weren’t a stranger and we’ve hung out a few times that’s pretty much the label you’re going to get. Not to undermine the definition of the word “friend,” or the value of the word, “friendship” but it’s unnecessary not to mention tedious for me to have to say, “Oh so-and-so? Yes, that is my acquaintance,” or, “Oh so-and-so? I worked with her for a few months. We’re cool, but we’re not close.” I’ve said it before and I’ll say it again, I have hundreds of acquaintances, plenty of friends, but only a handful of girls. They know who they are, and are the only people that should care.

I actually see the validity in this. More so growing up, and especially in high school. Not that I didn’t care about people in high school, I probably cared about them too much and for all the wrong reasons. I didn’t even go to my high school reunion. If I wanted to see certain people, I would’ve made an effort to keep in touch with them to begin with. Female alliances are still rampant in 2011 though, and I see nothing wrong with them. Better an alliance of women bonding over seemingly petty things like How I Met Your Mother and Christian Louboutins, than a circle of catty bitches being jealous of one another or fighting over an ex-man. 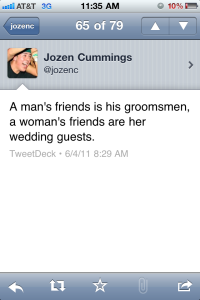 Again, this relates back to what we individually define as friends, and acquaintances, etc. If our bridal party are our only friends, then what do we call the rest of the guests that aren’t family at the wedding? Exactly. 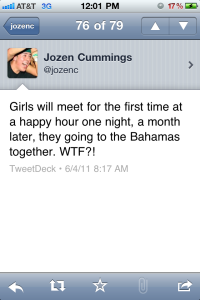 What can I say to this one other than – GUILTY AS CHARGED! LOL. I don’t know if this is because as a female I’m just too trusting of a person, or if it’s because I love vacations. I think it’s because I just like to have a good time with other people that like to have a good time. There’s actually people in my life that are awesome to bring to parties, yet I can’t have a conversation over 15 minutes with. And then there’s just some people I unfortunately didn’t get to meet sooner in life, but genuinely click with. The homie Jey also pointed out that women are usually just more welcoming whereas men have a tribe (or wolfpack) mentality.

This is probably the only thing Jozen has ever written that’s actually offended me. Not personally, but it’s almost like me saying a man can’t possibly love their child as much as a woman – and even that holds more clout because of the biological bond we have due to pregnancy. Perhaps I took the tweet out of context, BUT either way it’s a bold statement that definitely doesn’t seem like an “observation” on his part.

I’m sure what he observes are females constantly fighting over petty shit two dudes wouldn’t even waste a breath over. As well as a woman’s circle changing more often than a mans. But he’s not there when a woman cancels a date to take her girl out to dinner instead, because she’s crying over something that traumatized her months ago. He’s not there when a woman risks her own safety to rush over to her girls house, to pack up her shit before her physically abusive boyfriend comes home. And he’s not there when we have a chance to throw an ex-girl friend under the bus but don’t because we still appreciate the friendship we once had.

Some of my friendships don’t date back to the sandbox, and I barely even talk to the girl I consider my closest friend in the whole wide world. But that’s because I prefer quality over quantity, and because real friends can pick up from wherever and whenever they left off. I believe that the people I need in my life, are the people that need me in theirs. If that’s the case then not only am I blessed, but I’m honored as well.

This entry was posted in Life. Bookmark the permalink.